Scotney Castle is a tricksy little place. It’s over in Kent, land of some of the greatest castles, so you’d be forgiven for thinking it’s some kind of majestic crenellated beast. But, as any true castle aficionado knows, things aren’t always straightforward when it comes to the Trust and castles.

With a few noticeable exceptions – like the uber castles of Bodiam and Corfe – much of what the National Trust deems a “castle” isn’t so much castle as stately home, because English Heritage got in there first and nabbed all the good ones. That’s the short version, anyway – I could bore you with talk of the Office of Works and their role in the heritage movement, but nobody really cares about that except the kind of people who watch BBC 4 history documentaries. 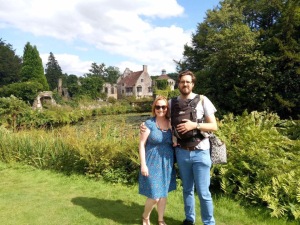 Anyway, Scotney sits somewhere in the middle of the castle-stately home continuum, as it encompasses both a small but fancy Victorian house, and the ruins of an old castle. Except the ruins aren’t all that ruinous anymore, as they were turned into more of a folly somewhere along the line, and so you feel more like you’re pottering about an eighteenth century landscape garden than exploring the ruins of a once-great fortress.

Despite this apparent shortfall in castle presence, we made our way over to Scotney back in the summer to meet some friends. It’s a long way from Bristol, which should 100% score us a load of friends points, but the friends we were meeting had come all the way from Australia. Which made us look a bit rubbish by comparison, really.

Strong. The cafe at the entrance has a large outside area, which would’ve been excellent on that summer’s day were it not for the fact that it was being besieged by bees. We claimed that we wanted to keep the bees away from the babies (we definitely weren’t scared of them ourselves) and headed inside, where we found two sofas in a corner.

Oh, those wonderful sofas. Oh, I loved those sofas. Once your baby can sit up, a sofa in a cafe is your very best friend. Rather than having to wrangle them awkwardly on your lap or play pass-the-baby as you take turns to have a hot drink, you can sit them up next to you, hand them some toys, and – with a carefully placed arm acting as a safety barrier – crack on with your cup of tea. I love a sofa, so a place with two of them was only ever going to get top marks from me.

A confession – we didn’t in fact test this one first-hand, as the layout of the estate – with house atop a hill and castle down in a valley and over a bridge – made it seem like perhaps a buggy would be more of a liability than a benefit. And I think that was probably the correct call, as while walking up the hill I was very glad that Billy was strapped to my husband rather than having a snooze in the Uppababy Beast.

I mean, it probably could be done, but it seemed like it would be a bit of a faff. And nobody can be doing with any excess faff.

Oh, Scotney. To speak of dogs in the same breath as you feels like a betrayal of the highest order, but speak of dogs we must. There were some good ones up by the cafe, enjoying the bee-infested outside space. Admittedly, the dog concentration levels weren’t particularly high, but the quality was excellent.

Dogs, however, are very much not the point of Scotney. For, until recently, it was lived in by a seemingly batty old lady who loved cats. Oh my, how she loved cats. The evidence of her adoration is all around the house, from the old copies of cat magazines, to the weird cat figurines in the bathroom, to the cat pictures, to the cat sculptures that are sticking their heads down into the fountains. There are cats absolutely bloody everywhere. It was a whole new level of design inspiration.

Of course, Billy cared not for these cats, for none of them were real. You can’t trick Billy with your stupid fake cats. Not when there are hero dogs bravely facing down the bee invaders who’re after your brownie.

The verdict
Plenty of cats, not enough castle.