Montacute House is one of the Bad Boys of the National Trust’s collection. One of the very first houses the Trust acquired, in the beginning they weren’t entirely sure what to do with it and found the whole thing rather embarrassing.

They weren’t really in the business of country houses, after all. The National Trust wanted to save the countryside. And yet, there they were with this whacking great Elizabethan mansion that didn’t have any furniture in it and could serve no practical purpose. What an almighty ballache it was. God. Country houses. Who cares about them?

Lots of people, it turns out. 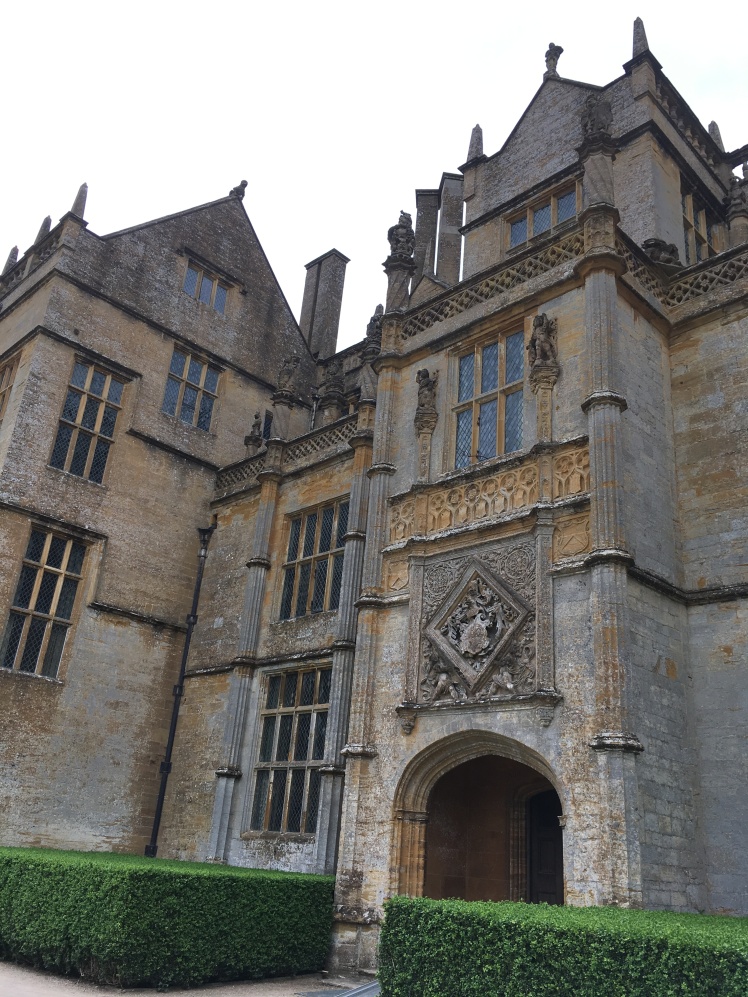 And indeed, these days lots of people care about Montacute. It’s the stuff of which period drama dreams are made (and indeed, many period dramas have been made there.) And, just in case you felt you were lacking a bit of culture on your day out, it’s also the home of an outpost of the National Portrait Gallery.

We went there on a rather nice spring day, and met some friends. Billy was on top flirting form, and grinned his way round the house and grounds. He also refused to sleep, but that’s more his problem than Montacute’s. I’d hoped that my insistence on giving him a detailed history lesson about the house, the Trust, and the people in the portraits might be enough to knock him out, but seemingly not.

It appears the boy loves history. Or maybe he’d just seen a dog.

Culinary facilities
Top notch. 10/10. There’s a brilliant courtyard cafe that was frequented by a cat that liked to eat people’s leftovers, but as Billy cares not for cats he wasn’t that fussed about it. I meanwhile, thought said cat was brilliant. He was totally shameless in his pursuit of cake. I think he might be my spirit animal.

Still, in non-feline news, the surroundings were ample. We had three buggies, two adults and three children, and had no trouble finding a space – even though it was on first glance crazy busy. I’d managed to forget to bring anything to eat, and yet managed to feed myself most heartily – always a bit of a challenge as a coeliac. I think I may even have double brownied it, which we all know is the hallmark of a truly excellent day.

Special mention also goes to the changing facilities, where they had a basket with wipes and spare nappies. It’s almost like they expected vast numbers of mothers and babies to descend.

Buggyability.
Pretty high. Sure, there was one point where the other kids went exploring a sunken garden and I had to push Billy awkwardly up and down while trying to convince him to just GO TO BLOODY SLEEP, but that’s the only awkward bit I remember. We got in and out of everywhere else we needed to go with no problems.

Well, I say “we” did. My friend with the reasonably-sized buggy had no problems. I bashed the uppababy into a few things, but that’s an everyday occurrence. I still bash it into my front door on an almost daily basis. The sleep deprivation seems to have killed my spacial awareness.

Dogs
I’m sure there were some, but I was unfortunately distracted by the food-stealing cat. Where did he come from? Does he live at the house? Did he meander over from some nearby village? Did I hallucinate him? All are equally possible, and I fear we’ll never know which one is true.

The verdict
Far from being the ridiculous embarrassment that the Trust once feared it was, Montacute is an excellent day out. It may even have made its way into my own top ten best ever National Trusts, if only for the cat. God I loved that cat.